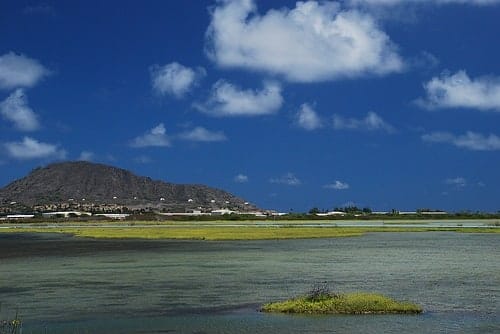 On the Windward side of Oahu, just north of Kailua sits the famous Kaneohe Bay and the city of Kaneohe. It's one of the larger cities on Oahu, with several elementary schools, Hawaii Pacific University just a few miles away off the Pali HWY, and its own shopping mall. While most of Kaneohe was built back in the 60's and 70's, the downtown area has recently undergone a renovation that has invigorated the Kaneohe real estate market.

When Highway 3 (H3) was built, the Kaneohe real estate market suddenly became a more popular place for buyers who worked farther west. H3 allowed people to commute quickly through the Koolau Mountain Range to Aiea, Salt Lake, Pearl Harbor, and the Honolulu Airport. With the west side a lot easier to get to, Kaneohe home sales increased significantly. 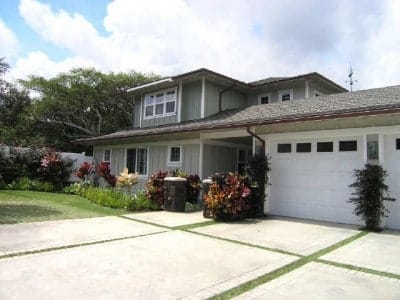 There are more than 11,000 housing units in Kaneohe, including single family homes, condos, and townhouses. You can get anything from a small condo in a high-rise for about $250,000, to an oceanfront mini-mansion for $4 million. You can even get a nice equestrian property in Kaneohe with several acres for just a couple million dollars, which is cheap for horse property.

The first thing you need to decide is whether you want to buy a house out in the country or one near town, because Kaneohe has a little of both. Kaneohe has a pretty decent downtown area, mostly a middle class blue collar feel, but it also has some great countryside with a few higher priced ocean front homes. Up in the northern region past Ahuimanu, there are rural areas that have an old Hawaii feel. The nice thing is that although it's country, homeowners are only half an hour or so from Downtown Honolulu.

The average single family home in Kaneohe is going to cost you about $800k-$950k, most of which were built in the 70's and 80's.  Kaneohe is quite a bit cheaper than Kailua and Hawaii Kai, but more expensive than Ewa, Kapolei, Aiea, and Pearl City.  It's just about in between Kailua and Ewa in terms of price and feel.  The homes in Kanoehe tend to be older, but a nice renovated house is going to be around $1.2million as of 2020.

From anywhere in Kaneohe, you can see the breathtaking Koolau Mountains—the most dominant visual feature of the area. The mountains are bright green, and have lush foliage all year long.

The Windward side of Oahu gets a lot of rain, and Kaneohe is probably the rainiest community. Kaneohe homes that are situated near the mountains get rain all year round, which means that mold and rot are a constant battle. However, residents of Kaneohe will tell you that it's worth it because the weather is cool year-round, with the trade winds blowing most of the time.

The biggest (literally) benefit of living in Kaneohe is its beautiful bay. Although there isn't much good surfing in Kaneohe Bay, there is great sailing, diving, and kite surfing. After spending some time in the bay, you can then go and enjoy one of the three golf courses in the area.

The Windward Mall was renovated in 2007, which has made a huge difference in the town. A few other shopping areas were renovated or rebuilt nearby, and have helped Kaneohe feel like the great little town it was back in the day. Just about everything you would need is in Kaneohe, so you won't have to go to Honolulu Town very often.  But the overall feel of Kaneohe is a little lower end, a little more blue collar than nearby Kailua.  It's the cheaper option if you want to be on the Windward side, and still has beautiful views, but not as many nice restaurants.

This lovely property is situated in the prestigious Haiku Plantation in Windward Oahu, a 24-hour privately guarded and gated community. A rare opportunity to build your o...

RARE OCEANFRONT PROPERTY! SELLER'S CREDIT TO CLOSING of $20, 000 at close of escrow. Opportunity to live in an oceanfront home with expansive and spectacular views of the...

Craftsmanship, Bay Views and beyond!! This home has it ALL!! Re-built in 2018 with no detail ignored, this home represents Hawaii lifestyle like you have rarely if e...

RARE OCEANFRONT PROPERTY! SELLER'S CREDIT TO CLOSING of $20,000 at close of escrow. Opportunity to live in an oceanfront home with expansive and spectacular views of the ...

You won’t find better views that this! Welcome home in the beautiful Lulani Ocean neighborhood. Situated in Kaneohe, this mutiple dwelling home is ideal for Ohana living,...

SELLER OFFERING $20,000 CREDIT TO CLOSING COSTS. Make this NEWLY BUILT beautiful 2-story home with an attached LEGAL 2/1 ADU with its own kitchen, electric meter and laun...