One of the most interesting facts about Pearl City that it's not part of Pearl Harbor. Aiea, Pearl City's neighboring community, is closer to Pearl Harbor is closer to the historical site and naval base (which is a joint facility with the Air Force, Joint Base Hickam Pearl Harbor), and Halawa is the neighborhood next to the facility. Many websites, which are probably not maintained by locals, often confuse Pearl City, Aiea and Halawa as being the same place. 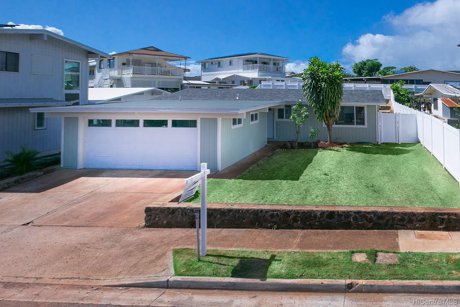 However, Pearl City is one of the most visited towns in the Central Oahu area for locals, with its views of Pearl Harbor and Peal Highlands Center. But if you were to go back 250 years, the suburb would have been unrecognizable with its muddy rice patties. The area that would become Pearl City in the 1800s was the last stop for the Oahu Railway, pulled not by an engine, but a four-horses wagon team.

The owners of the railway, Oahu Railway and Land Company, also owned much of the land that would become Pearl City. Plans were drawn up for the town — the first planned development in the state — and the company held a contest to name the town. Pearl City was born.

Even with its development into a residential community, Pearl City went through many changes over the last few decades. Older locals will remember the Quonset huts that lined the area off Kamehameha Highway until the '90s. The huts were built by the military during World War II and one of them, Quonset Hut 33, is still standing and is a state historical site for housing Black sailors. The huts housed about 4,000 sailors and was the largest U.S. Naval facility anywhere in the world at the time for Blacks in the then-segregated military.

The huts also served as the temporary studios of the original Hawaii Five-O in its first season in 1969 while permanent facilities near Diamond Head were being build.

Residents of Pearl City then would have had to drive into Aiea, Wahiawa or Honolulu for entertainment and shopping. The exception to this would have been Pearl City Tavern, a popular landmark and hangout for decades because of its monkey bar (yes, a bar with live monkeys) behind a 40-foot bar (the kind with alcohol). It had a reputation as being a hangout for sailors and Marines, with the two often brawling with each other. The tavern closed in 1993 to make way for a car dealership.

However, Pearl City today has many more options. A whirlwind of development that began in the '90s radically changed the shopping and entertainment options in the area.

Pearl City is one of the wettest places on Oahu, which is interesting because the windward side of the island and East Oahu are usually regarded as the rainy part of the island. Historically, July has the most rainy days. Most of the rainfall is in November.

The average temperature ranges from the mid-60s to mid-80s with the hottest days in August and September; the coldest months are December and January. Like all of Hawaii, when the trade winds are blowing, the weather is the best on the planet. When it's not blowing, it can get humid, especially in the summer months.

Pearl City District Park is the most recognizable recreational facility in the area. The large park features a baseball field and basketball courts. There's also a pool in the gym. However, there are complaints of graffiti and the park not being kept up as well as it could be. 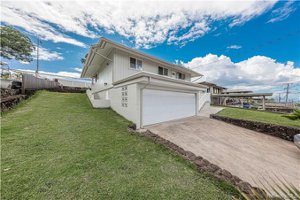 An alternative would be the often-overlooked Pacific Palisades Community Park, a smaller park with a basketball and pickleball court, at the top of Pearl City near the Palisades Baptist Church Pre-School. There's also an on-leash dog park nearby if you have a four-legged member of your family. This park is highly recommended by many residents but be aware there is no bathroom.

If you have kids who skateboard, Manana Community Park features a skate park. It's across the street from the district park and not too far away from the Pearl City police station and Pearl City Public Library. There's also a basketball court and activity center.

For hikers, there's also the Waimano Falls and Pools in Pacific Palisades. The hike takes about two hours round trip but take care to stay on the path (marked by pink arrows) and to not slip on the path which can get muddy. The payoff of the hike is a waterfall, though hikers are advised not to swim in the water. Also, the water falls dependent on the weather. If it's dry, it may not be running, and you'll be treated to a muddy pond.

Another option for hikers is the Keaiwa Heiau State Recreation Area in neighboring Aiea. The area named for a shrine, or heiau, the ancient Hawaiians built in the 16th century that was dedicated to healing. The trail offers scenic views of Halawa Valley, including the H3 freeway, Pearl Harbor to the Waianae Range to Honolulu and Diamond Head.

Both trails are recommended for parents with older children, as the trials can get moderately difficult.

Nearby parks near the ocean are the Neal S. Blaisdell Park and Aiea Bay State Recreation Park. The Neal S. Blaisdell Park is better known and because of that it gets crowded on the weekends. The Aiea Bay State Recreation Park considered to be a hidden gem by locals in the area and offers a much more relaxed experience, with beautiful views of Pearl Harbor and the Arizona Memorial.

However, neither park is a beach park. The closest beaches would be in Ewa, including White Plains Beach, Oneula Beach Park and Pu'uloa Beach Park. White Plains is known more as a surfing spot, so it's not as kid friendly as the others.

The North Shore and its numerous beaches — including Haleiwa Beach Park (a good choice for families with kids) — are accessible in about 40 minutes. Keep in mind that the only way in and out of the North Shore is Kamehameha Highway and accidents often cause traffic snarls both ways. The popularity of the area and locals also means significant additional travel time on the weekends, and that's not including hunting for parking.

Other beaches on the island, including Lanikai on the windward side, and the south beaches of Waikiki and Ala Moana are easily accessible via the freeways, but, like the beaches on the North Shore, expect those beaches to be packed on the weekends. The beaches in Ewa are offer an alternative with less stress in traffic and parking.

The University of Hawaii–Leeward Community College is also located within Pearl City. 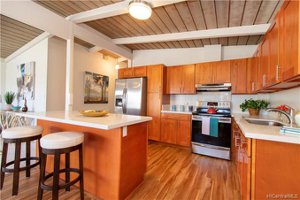 Our Lady of Good Counsel School is a private Catholic school that also serves the Pearl City area.

Shopping in the area has traditionally been dominated by Pearlridge, the state's second largest mall about 10 minutes away in Aiea.

Shopping and dining in Pearl City options about 30 years ago were modest, with Foodland, a local supermarket, and Holiday Mart, a Japanese department store that specialized in electronics and specialty foods from Japan. Pearl City Tavern and Flamingo on Kamehameha Highway was the highlight of Pearl City's dine-in scene.

However, in the '90s, the Pearl Highlands opened, and it was a harbinger of changes in the retail and restaurant scene in the community. It brought Sam's Club, with a Walmart opening right up the street. 24 Hour Fitness, which had occupied space in Pearl Kai Shopping Center in Aiea, moved into the new development. Regal Theaters opened movie theaters there as well, competing with Pearlridge's megaplex.

Pearl City Shops, a retail strip mall, opened next to the Walmart and Pearl City Gateway was built across the street. At around the same time the Quonset huts were torn down and The Home Depot built in its place.

The popularity of the Pearl Highlands center and the surrounding retailers and restaurants can't be emphasized enough. Which is good because of its increased options, but a bad because of the increased traffic. Acacia Road, which feeds Kamehameha Highway into the various shopping destinations, is now a heavily congested intersection. The planned opening of a rail station at Pearl Highlands will only make these shops even more popular.

The new shopping destinations offer up a plethora of choices for dining. My personal favorite for Thai is a tossup between The Elephant Shack in the Pearl Highlands food court and Thai Lao off of Kamehameha Highway, next to the former location of Flamingo. Both are outstanding and are perhaps the best Thai food from Mililani to Aiea.

La Tour Café, with its Vietnamese-inspired food, is an excellent choice as well. Though they're mostly known for their macaroons, their sandwiches are well worth trying as well and is a great place for foodies.

There's two Zippy's within about a mile of each other. But what's notable about the Zippy's on Kamehameha and Puu Momi Street is its outstanding sushi bar. That's right — sushi in Zippy's!

Though Pearl City has often been a great choice to raise a family, the last 30 years has brought changes to the community that make it a retail and dining destination. Check out our listings for homes in this area below!

Homes for Sale in Pearl City and Aiea

This well maintained home is in heart of Pearl City. Single detached family home with 3 bedrooms, 1 bath and a carport with enclosed storage with full bath inside. Enclo...

LOCATION! LOCATION! Fully renovated in 2019. Currently using as a foster home. Grassy and modern wood fenced in the front. Relax and enjoy the cool breezes in your tran...

GREAT OPPORTUNITY IN AIEA MEDICAL BUILDING, conveniently located across Aiea Shopping Center and on the bus line. Enjoy the sweeping views of Pearl Harbor from this CORN...

Rarely Available 10,890 sq ft vacant lot in the Aiea Heights neighborhood. Napuanani Rd does not exist next to lot. Buyer to do own due diligence on property usage.