In the center of Oahu is the Mililani real estate market. It's kind of like Seattle in Hawaii, in that it's often overcast and cool.  You will love it.

Mililani is a community that, for many, is a Goldilocks community — it's just right. Not as urban as Honolulu, meaning it's not as dense and congested with street traffic, but not as rural as Waianae, meaning it has all the comforts of a suburb. You may not be able to walk to the beach, but the North Shore and South Shore beaches are about 30 minutes away, with no traffic. It's also "just right" to the extent that it was named All-America City in 1986, the only town in Hawaii to have been given that distinction.

Most of the retail development is in the Mililani Town side of the community, or the older part of the community which was developed in the '70s. The newer part of Mililani is Mililani Mauka, which began construction in the '90s. In many cases, the homes in Mililani Town which had active families in the '80s and '90s, are now home to more a more senior population now that their children have moved out. Mililani Mauka expands out of the valley Mililani is in and spans into the mountains (more on this later).

But it's not only beaches that you'll be central to in Mililani — you'll pretty much be central to everything. The major shopping centers of Pearlridge and Ala Moana are within half an hour away (with no traffic), and even communities on the windward side won't take much longer to get to.

Mililani's central location makes it extremely desirable for not only families that work in the urban core, but servicemembers and civilians working for the military because of its quick access to Schofield Barracks and reasonable commutes to Ft. Shafter, Camp Smith, and Joint Base Pearl Harbor-Hickam.

See all Mililani property listings below.

Mililani Town is the older side of the city, with houses dating back to the 70's. "Older" means smaller and sometimes in need of renovation, especially in Hawaii. The town side of Mililani has a great charm about it, with mature tree-lined streets and an older Hawaiian feel that is familiar to those who have lived on Oahu for many years. Some of the neighborhoods have been very well maintained, which is reflected in the prices. We love the Town side of Mililani because it has such great character.

You get more for your money in the town side of Mililani than on the Mauka side ("Mauka" means mountain in Hawaiian), though there are definitely some neighborhoods to avoid. This is because some people haven't kept their homes in very good condition. It's just a pride of ownership issue, and I'll be happy to guide you to the best Mililani homes available. 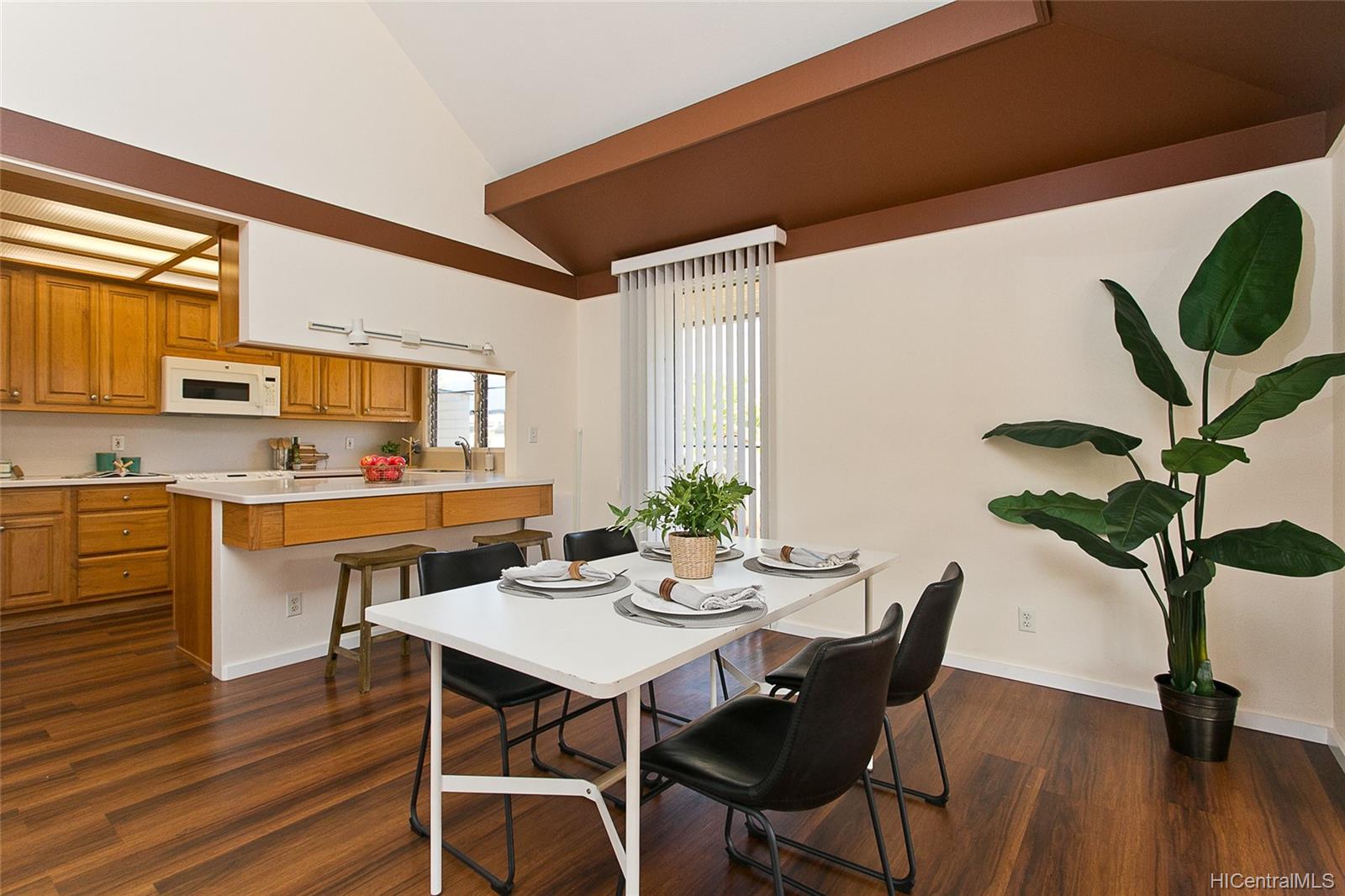 The Mauka half of Mililani is the newer side, with construction that began in the 90's and is still going on. Mililani Mauka homes are lovely and ideal for people from the mainland who have lived in nicely manicured suburbs with large, well-kept homes.

Prices in the Mililani Mauka real estate market start around $400k for a small condo, and at about $750k for a small house. Upper end homes in Mililani Mauka can be over a million dollars, and usually have 3500sqft or more of living space. The average price for a nice Mauka home is between $800k.

For some reason "amenities" has recently come to mean "it has a Costco." While Mililani does in fact have a Costco, it has a lot more than that too. Wal-Mart, City Mill (hardware), Starbucks, Borders, Longs, and dozens of other retailers are available at the Mililani Shopping Center. Along with the wide variety of shopping in the area, there is also a lovely community center with a pool, and a well-appointed medical center in Mililani Mauka.

Mililani is also home to excellent schools. In fact, Mililani schools are famous in Hawaii for being top rated in all areas. Each year the test scores and parent reviews validate the reputation that Mililani has for producing top quality students. Mililani Mauka Elementary and Mililani Ike Elementary both rank in the top tier of school reviews done by Honolulu Magazine.

People like Mililani because the properties on the Mauka side are newer, the shopping is organized, the streets are clean, and the community feels like a neighborhood more than a big city. The homes in Mililani feel modern but still maintain some Hawaii feel. Moreover, the master planning done by developers of this community makes it very easy for residents to get from one place to another.

Located in the valley between Oahu's two mountain ranges, Koolau and Waianae, Mililani Town and Mililani Mauka are built on former pineapple fields. The community offers some of the best trade winds when they're blowing, and while Honolulu gets hot in the summer, Mililani usually keeps its cool. In the winter, it does tend to get chilly, but keep in mind that "chilly" in Hawaii means the mid-60s, at most (usually).

Mililani is a community that's very popular with families, and for good reason. It was planned with families in mind. There are seven recreation centers with amenities like pools, tennis courts and fitness classes, run by the Mililani Town Association, throughout Mililani Town and Mililani Mauka.

Five public elementary schools are in both Mililani Town and Mililani Mauka, as well as one middle (Mililani Middle School) and one high school (Mililani High School). Hanalani is the area's private school, and numerous pre-schools serve the families in the area.

The public elementary schools include:

Mililani's past as in agriculture is reflected in the colors of the high school, brown and gold, evoking the colors of soil and pineapples. Mililani High School is one of the largest public high schools in Hawaii and boasts very competitive junior varsity and varsity teams, with its football team considered a powerhouse in the state.

When Mililani was in the infancy of being built 40 years ago, families had to shop in nearby communities like Wahiawa and Pearl City for basics like groceries. Today's Mililani has a multitude of supermarkets, banks, credit unions, retailers, gyms, theaters, quick-service and sit-down restaurants. Most of these establishments are split between the Mililani Town Center and Mililani Shopping Center in Mililani Town.

Mililani met so many desired demographics that Wal-Mart opened its first location in Hawaii in Mililani. If you like to dine out, you'll be hard-pressed to find a cuisine not represented — Italian, Chinese, Korean, Thai, Japanese and even standbys like Chili's and Wingstop can be found.

The Mililani Town Center also hosts a "Pineapple Drop" each New Year's Eve at 7 PM, so it's coordinated with New York's ball drop and, probably more importantly, so the kids will be up for the festivities as well.

There's not much you can't find in Mililani — but Costco is about 10 minutes away, Sam's Club about 15. Pearlridge is about 20 minutes away with Ala Moana about 30 minutes away and Waikiki about 35 minutes.

Mililani is one of Oahu's most popular communities. While it paved the way for other developments in Central Oahu since its construction, not many have the same suburban hominess and convenience of Mililani. If you're looking for a family-focused community or a quiet, bedroom community that not too far from anything the island has to offer, look at our listings for this popular town.

Contact AlohaTony to learn more about buying or selling Mililani homes and condos.

You will want to show your client this "Forever Home" that sits on a prime RIM LOT overlooking the valley! 4 Bedrooms, 2.5 Bathrooms with a Spa with Skylights that includ...

Perimeter high floor unit with view to Diamond Head. $30,000 below market so you can remodel your way!

This charming home is move-in-ready and located in the desirable community of Mililani. You have 2 bedrooms, 1.5 baths, an open concept kitchen, beautiful ceramic floorin...

This four bedroom home is the definition of the open living concept. Showered with beautiful natural light, the large sliding doors connect the interior to the exterior -...

Come and see all Mililani has to offer in this 5 bed/ 3.5 bath home close to 16 Acres Park and 3 homes away from Kaomaaiku Neighborhood Park with its very own skate park....

Don't miss out on this rare opportunity to own in highly desiarble "Nohona II at Mililani Mauka. This newer built 3/2.5 split-level ground floor unit is well maintained a...