Should Military Families Buy a House in Hawaii?

In 2023, with the housing market slower, you could make over $100,000 when you sell a home - as long as you own it for a few years!  Real estate can make you money even when housing values are falling, because you can rent it out and have a tenant pay off your mortgage, and you can get a tax deduction for doing so!

If you're an E5 or higher, your BAH in Honolulu will be at least $2500 with dependents, and as high as $4600 per month if you're an O4 or higher. This gives you a great opportunity to invest in Hawaii Real Estate!  Why would you give this money to a landlord when you can put it into a house and pay down a mortgage?

How much house can you buy on Oahu with your BAH in 2023?

Many military families can afford between $600k and $1million using a VA loan. You can buy a home with zero down on Oahu up to $726,535!!  You may feel like that is way too much to spend on a house, but remember, Hawaii real estate has historically risen between 3-15% per year.

To get started, you need a great Realtor to help you invest in a house that your family will love, in a safe neighborhood that feels like home.  That's us!

Questions about real estate while you're stationed in Hawaii?

The Amazing VA loan for Hawaii
How much is the VA loan limit in Honolulu County? In 2019, the Honolulu VA loan limit changed to allow some veterans to buy a home up to $1.5 million with zero down!

I have handed $400,000 checks to military families who sold their Hawaii home a few years after they arrived.

While homes in Hawaii are some of the most expensive in the country, that also means that buying real estate in Hawaii can help you make a lot of money to use when you move to other cheaper areas. I've worked with families who bought a small condo here in Hawaii, and when they were transferred to Texas or Colorado, they were able to buy a HUGE house using only the equity they built up on their home here.

A few years ago, a military family bought a house in Ewa Beach, and 4 years later, I helped them sell that house that had gone up by over $250,000.  Since they had faithfully paid down their mortgage for 4 years, that had enough equity to buy a house in Colorado with no mortgage! 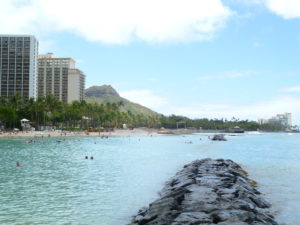 Getting assigned to Hawaii is a great opportunity for you. We'll help you every step of the way, showing you which areas of the island are more affordable, which areas are desirable, and very importantly, which areas your family will like!

Contact me now and we'll help you buy or sell your home in paradise!

There are several military bases in Hawaii, which means there are military families everywhere! 10% of the population of Oahu is military!   So you want to find a home that is near enough to your base to allow you to commute. You'll be surprised at the traffic in Honolulu, especially during rush hour, and especially travelling to and from the west side, the Ewa Beach side of Oahu.

Army Bases in Hawaii - about 40,000 military and civilian employees!  Where do military families live on Oahu?

TRIPLER There are hundreds of medical personnel at Tripler, that giant pink building that overlooks the freeway in Moanalua.  If you're stationed at Tripler, you can live almost anywhere on the island, because it's near the H1 and H3 freeways, just about the midway point between town and Aiea.

I have found that a lot of Army doctors and nurses like to live in Kailua and Kaneohe,  just over the hill on the H3.  Kailua is a great little town that feels a lot like mainland beach towns.  Kaneohe has some great country like properties with large lots and cheaper prices than Kailua.

Schofield.  If you're stationed at Schofield, you probably want to live in Royal Kunia, Mililani, Ewa Beach, or the North Shore, because all of those areas are within about a 30 minute drive. The great thing about these areas is that real estate in the Mililani, Royal Kunia, and Ewa Beach areas are newer and cheaper than in Metro Honolulu. In fact it's cheaper than most of the island, and in better condition overall. There are a lot of nice newer houses and condos in Ewa Beach, Royal Kunia, and Mililani, so military families tend to love those areas.  They usually like good quality construction!  Mililani Mauka, Royal Kunia, and Ewa Beach are three of the few master planned communities in Hawaii.

There are more Navy personnel in Hawaii than any other branch of the military. Granted, a lot of these are civilian contractors at Pearl Harbor, or E1's and E2's, so they may not be looking to buy a house in Hawaii. For Naval officers and E5's and higher, buying a house in Hawaii is a wonderful added blessing to being stationed here. Since many homes in Hawaii have an ocean view and easy marina access, Hawaii is a wonderful place for Navy personnel to live. For those who love the ocean, what better place could there be than Hawaii? Here's an interesting fact: there are over 9000 civilians that work at Pearl Harbor.  If you're stationed at Pearl Harbor, the easiest place to live might be Kaneohe, since you can zip up the H3 and get there with almost no traffic, any time of the day.  Some people stationed at Pearl/Hickam also live in Aiea and Pearl City, which is closer but a bit more crowded and city like.  You have to see it to understand.

Marine Corp Base in Hawaii - about 17,000 Total people 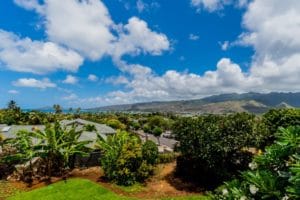 Kaneohe Bay Marine Corp base is the 2nd largest base on the island, in terms of active duty personnel. Like a town in itself, Kaneohe Bay has everything from grocery stores to a golf course, to movie theaters. You almost forget you're in Hawaii until you see the most beautiful ocean views you've ever seen. There are many homes and condos just outside the base, that make military living very easy. Kaneohe and Kailua are wonderful places to live, very family friendly, and there are plenty of military families everywhere. In fact some of the schools have a large percentage of military kids. Shopping for a home around Kaneohe Bay can a wise move for military families, because there are really beautiful homes around the bay and the prices are a little lower than Kailua.  Also you can get a much larger lot out in the country, the Northern end of Kaneohe, in neighborhoods like Ahuimanu, Punaluu, Lulani Ocean, and Haiku Village.

The Air Force has a very strong presence in Hawaii, with 2 main bases, Hickam and Bellows, and one smaller one called Wheeler. Hickam is now basically the same as Pearl Harbor, connected in fact.  It's located very central to Honolulu, right where all the traffic converges. It can be a grueling commute in and out of Hickam if you live too far. That's why I recommend that Hickam personell live in close areas like Waipio Gentry, or up the H3 in Kaneohe.  There is housing very close to Hickam, but it's usually not that great.  You never want to live super close to the airport in any town.  I recently sold a nice home to an O3 that was very new and in a nice neighborhood. We had looked all over Honolulu, but found that going just a few minutes out of the area gave us better options.

You've read this far, now what?  The next thing you should do is contact us about buying a home in Hawaii!

Based on information from the Multiple Listing Service of Hicentral MLS, Ltd. Listings last updated on . Information is deemed reliable but not guaranteed. Copyright: 2022 by HiCentral MLS, Ltd. IDX information is provided exclusively for consumers' personal, non-commercial use. It may not be used for any purpose other than to identify prospective properties consumers may be interested in purchasing.